On my recent trip to Japan, I fell in love with Japanese onsens. Sitting in a hot spring after a long day oh hiking the Kumando Kodo made my trip even better than I though it would be. To help you enjoy the onsen life I’ve put together this Japanese Onsen Etiquette guide.

At first I was a little worried about getting in my birthday suit in front of a bunch of strangers, but it really grew on me. Now I love the Japanese Onsen experience!

An onsen (温泉) is a natural hot spring. The water is geothermically heated because of all the volcanic activity in Japan. Literally translated onsen means hot spring water. These hot springs can be indoors or outdoors and come in many shapes and sizes. During my time in Japan I visited onsens that were large enough to fit hundreds of people and those that fit only 5 or 6.

When looking for a true onsen make sure the water is actual hot spring water and not just heated. There are non-onsen public baths in Japan known as sento where the water is only heated. So what is onsen specifically? In order to be a true onsen the water must be at least 25C when it emerges from the ground. It also has to contain 19 chemical elements and minerals that occur naturally in the spring water. Onsen is also believed to have healing properties. Japanese people, especially ones who live in areas prevalent with hot springs, visit onsens multiple times a day.

For many foreigners onsen can be intimidating because before entering the water one needs to remove all their clothing. However, those willing to learn about this cultural norm will fall in love with onsen life. I did.

Read More: Thing to Know Before going to Japan

While in many other parts of the world bath houses allow users to wear bathing suits, Japanese onsen etiquette require anyone entering to be completely naked. In onsen culture bathing suits and towels in the water are considered dirty and will contaminate the clean water.

Believe it or not, being naked at an onsen is no big deal. No one will be staring at you because no one cares what you look like. With that being said, you’ll be given a modesty towel to bring with you to help cover your more private areas as you move around. More information on towels later.

Pin it for Later 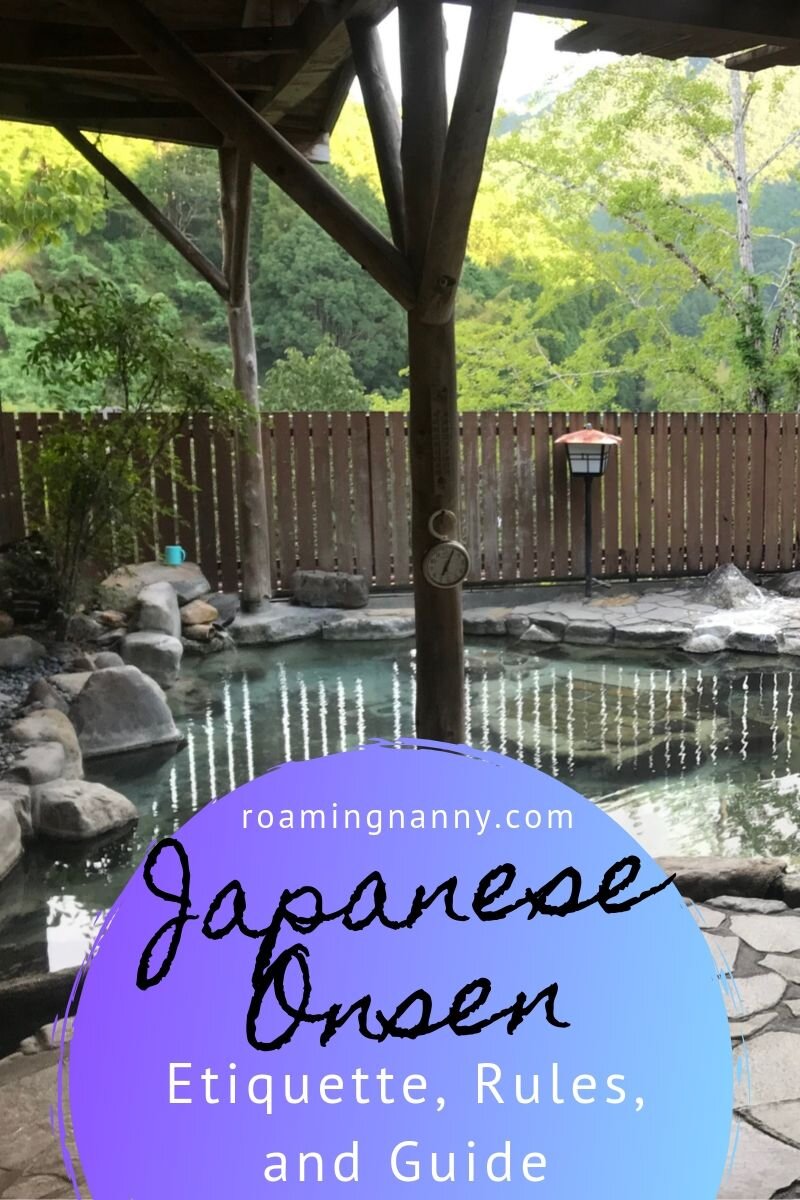 Before heading to the onsen, if you’re staying in a ryokan – a traditional Japanese inn – make sure you put on your yukata (cotton robe), slippers, and grab both the small and large towel in your room. The slippers are left at the door on the shelf. The yukata and large towel are left in a basket or locker before entering the onsen to shower.

The small towel comes with you to shower and when you go into the bath. However, the small towel should never go in the bath with you as it is considered dirty. Many people put the towels on their heads while sitting in the bath. The large towel is for drying off after your dip in the mineral rich water.

There is a lot to remember with the towels, yukata, slippers, and other onsen etiquette. If you forget don’t be afraid to ask. Japanese people would rather have you ask questions than to do things wrong.

Japanese Onsen Etiquette Rule #3: Shower Before Entering and after Exiting

Before getting in the Japanese Onsen it is customary and required to completely wash your body. At most onsen soap, shampoo, and conditioner is provided. However, if you prefer your own products it’s OK to bring those with you.

The small modesty towel is used to scrub your body fully when you wash, just another reason why it doesn’t go in the hot spring when you do.

A few tips, don’t remove the shower head from the wall, and make sure you sit down on the stool. This way you won’t spray other people in the area. Leave a space between the person next to you if possible when showering.

If you have long hair make sure you bring a hair tie, headband, or clip to secure your hair to your head. No one wants to be soaking in a hot spring full of other people’s hair…gross!

In addition to hair being in the bath, do not dip your head under the water. This is for your safety and others. While cleanliness is the most important thing when it comes to life at an onsen you never know. Keeping year head above water keeps your mouth germs out of the water and any germs that may be in the water off your face.

Japanese culture is full of quiet calm, and it’s no different in an onsen. While an onsen isn’t like the metro, where silence is golden, it’s Japanese Onsen etiquette to keep yourself from getting too loud. As a naturally loud person I understand the challenge here.

While the following things aren’t rules they are general onsen etiquette. Japanese culture is full of unwritten rules and these are some everyone follows when in a Japanese onsen.

Bodies come in all different shapes and sizes. However, don’t stare at those bodies as they walk around naked in an onsen, it’s rude.

Tattoos are still pretty taboo in Japan as they are still associated with the Japanese Mafia, the Yakuza. While this mindset is slowly changing some onsens do not allow people with tattoos inside.

I have several tattoos and while I didn’t have any issues, the onsens I went to were small, where the people I was traveling with took up the entire place. I also went to a larger resort which is accustomed to travelers. Before entering an onsen make sure tattoos are acceptable if you have them.

Cameras and cell phones of any kind are strictly prohibited inside onsens. As you’ve probably noticed there are no photos of myself in the onsen or anyone else. To even get these photos I had to wake up early and make sure there was no one soaking in the Japanese onsen before snapping these photos to show you all.

Before you go in the onsen drink a big glass of water. The same goes for when you exit the onsen. The water is extremely hot and can dehydrate you faster than you think it will. Staying hydrated will ensure you have a more pleasant onsen experience.

What to do in Tokyo: Temples, Attractions, Museums, and More

A Nara Day Trip: The Perfect Day with Temples, Deer, and Sushi

Oh Hi, I'm Retha the Roaming Nanny. I help women find adventure from the everyday to the epic all around the world. I'm an Appalachian Trail thru hiker, have climbed Mount Kilimanjaro, gone scuba diving in Mexico, and explored ancient temples in Japan. Think of me as your Adventure Fairy Godmother!

Join the adventure and receive updates a few times a month of new blog posts, my upcoming trips, contents, and more!

This Post May Contain Sponsored Content And Or/ Affiliate Links. This Is A Way I Make An Income From My Blog

I Am A Participant In The Amazon Services LLC Associates Program, An Affiliate Advertising Program Designed To Provide A Means For Sites To Earn Advertising Fees By Advertising And Linking To Amazon.Com.